Portland suburb Hillsboro (home to more than 16,000 Intel jobs; part of “Silicon Forest”) became the first U.S. city to adopt language favorable to PRT within a “specific plan.” A specific plan is a city-adopted long-range plan for real-estate development and transportation for a contiguous, significant portion of a city. Hillsboro’s ambitious AmberGlen Plan states, “A transit circulator facilitates quick connections to transit stations. Eventually … PRT or other local circulator could serve to focus area investment near transit corridors.”

The distance from the north end of AmberGlen to Quatama MAX LRT is 2.0 miles. A faster-than-a-car PRT system makes this connection five times faster than jogging speed circulator bus or 19th century streetcar. There are no successful suburban streetcar circulators in the U.S. 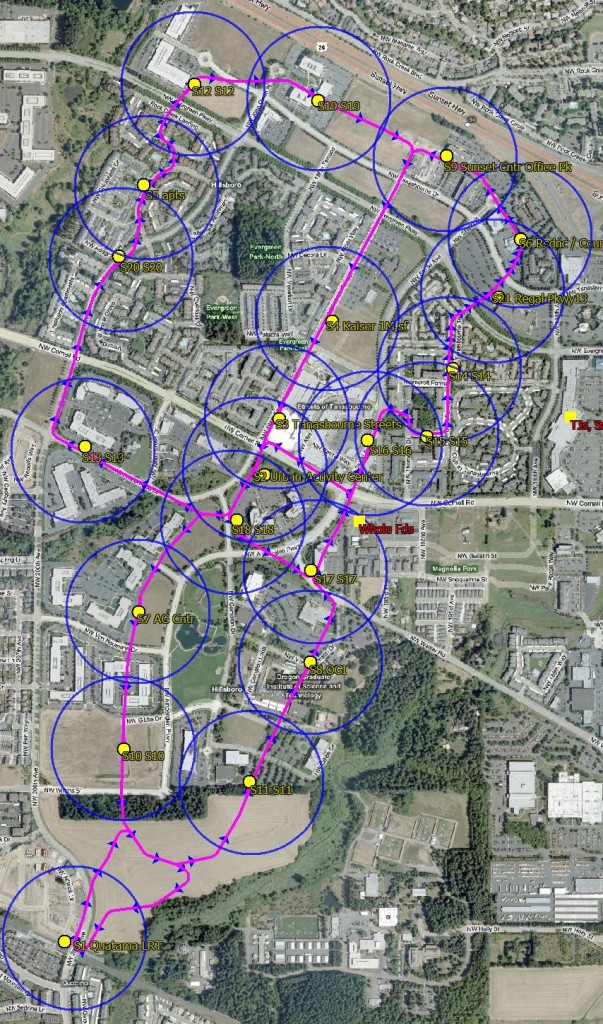 120 years ago, streetcar transit was a brand new technology, providing faster, better, and cheaper local transit than the alternatives. Starting in 1888, streetcars changed the way cities were built. Likewise, PRT is a brand new technology, providing faster, better, and cheaper local transit than current alternatives. Conventional local transit serves narrow strips at a slow pace. Non-stop, faster-than-a-car PRT serves two-dimensional areas. Cities are two-dimensional areas, not narrow strips. A PRT system can put all AmberGlen workers and residents within a 300 meter walk of a PRT station; conventional local transit will serve only a small fraction of that many people. At the Congress for New Urbanism 2005 Conference, Peter Calthorpe said, “One of my pet peeves is that we’ve been dealing with 19th Century transit technology. We can do better. We can have ultra light elevated transit systems with lightweight vehicles. Because the vehicles are lighter, the system will use less energy. If you think about what you’d want from the ideal transit technology, it’s PRT: a) stations right where you are, within walking distance, b) no waiting.”

Typical streetcars provide an average speed of 7-12 mph for local-stop service (6.5 mph from a separate analysis) – jogging speed. Streetcars are further slowed long waiting time – headways are 13 minutes during peak hour in Portland. The streetcar speed is often exceeded by ordinary local-stop bus services. One clear speed-and-reliability benefit of the bus is intrinsic to the technology: Buses have the physical ability to go around obstructions that occur in their lane, while the streetcar is stuck behind them. (see: http://www.humantransit.org/2009/07/streetcars-an-inconvenient-truth.html, http://web.cecs.pdx.edu/~monserec/courses/urbantrans/projects/9A_presentation_2007.ppt, http://portlandtransport.com/archives/2005/07/how_fast_is_tha.html).