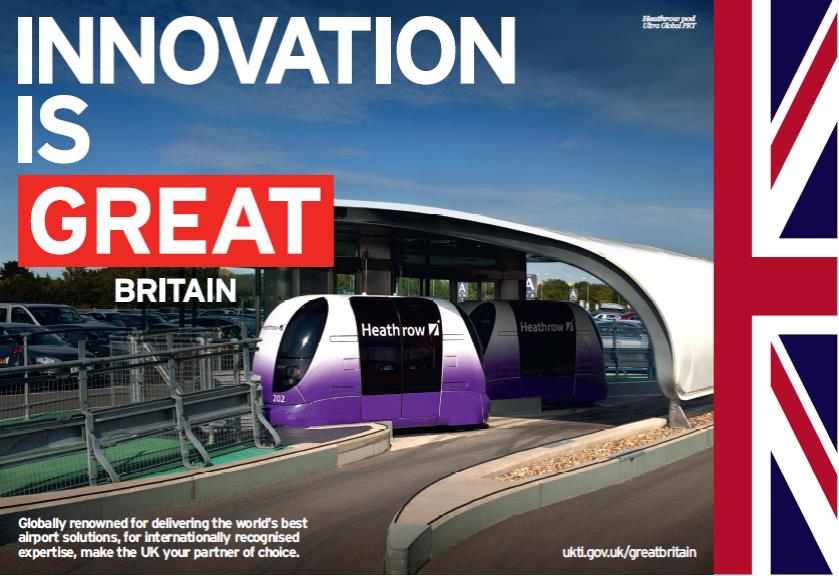 Images from Ultra Global’s Heathrow pod personal rapid transit have been included within UK Trade and Investments (UKTI) ‘Britain is GREAT’ campaign. The promotion which is designed to showcase the very best of what Britain can offer was originally launched in September 2011 by Prime Minister David Cameron. Since then Ultra Global have been able to take part in a number of events organized through the campaign however this is the first time images from Ultra’s system have been included within the artwork used to promote the initiative. Alongside images of the pods, the campaign also features the likes of McClaren Formula One Cars, Robotic Hands from Touch Bionics and the Bloodhound supersonic car.

The images will form part of a portfolio of pictures available to British diplomatic teams across the world to highlight the best of British skills and expertise and to encourage people to visit, study and do business with the UK. Ultra were delighted that the The RT Hon Michael Fallon, Minister for Business and Enterprise and Minister for Energy used the images featuring Ultra’s pod during the launch of his Construction 2025 agreement earlier this year. Ultra plan to use the artwork at a number of events they are attending this year.